. . . offers the opportunity for the motorsports enthusiast community to help reduce veteran suicides by raising the awareness level about veteran suicide and resources available to veterans dealing with PTSD.  The program supports the mission of the Disabled Veteran Empowerment Network – DVEN.org.

The Top Dog Championship Format
The format is a TrackCross/Track Sprint with one car on the track at a time.  This allows experienced drivers and novices to compete on an equal footing for Top Dog honors and for points toward the overall Top Dog Championship Trophy.  Compete with your daily driver.  Spoiler – Army won in 2021! 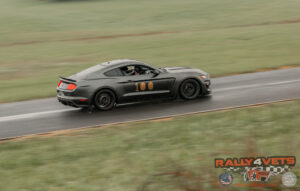 This is a Service Team Event!
The Department of Defense conducts inter-Service sports competitions in 23 sports, from archery to wrestling, but not in motorsports.  The DVEN/Rally4Vets Top Dog Championship event lets veterans, active-duty personnel, family members, and friends of a Service to come together in a friendly, low-risk environment to compete for bragging rights [Army-Navy football, right?] and to have their Service inscribed on the DVEN Top Dog Trophy.

Who Can Participate?
The Top Dog Championship is open to veterans of all services, including the National Guard and Reserves; active-duty personnel; family members; and enthusiasts who want to support the military/veteran community.

How Many Drivers?
We have just 80 driving slots so register today!